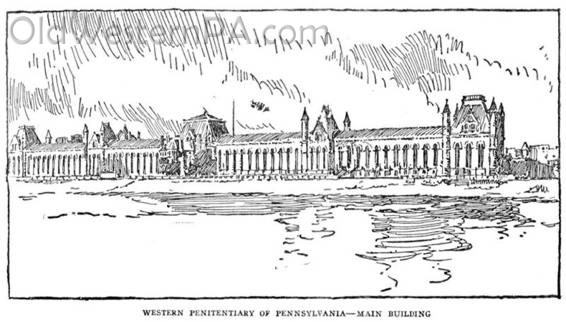 For almost 200 years, Pennsylvania and its penal institutions have been leaders in prison innovation and reform.  Born in 1818, Western State Penitentiary (known as SCI-Pittsburgh since 1955) not only shares in the early history of our city and state, but claims a legacy of leadership and progress in penology and reforms that would set national and international standards for over a century.

Following the Revolution, Americans who had fought for “life, liberty, and the pursuit of happiness” now sought a more enlightened approach to imprisonment.  , through the Prison Society of Philadelphia, was at the forefront of penal reform.  Earlier jails in Philadelphia had already challenged long-held penological practice, which had evolved little since medieval times.

Through the guidance of the Prison Society, Pennsylvania legislators approved the construction of two state penitentiaries in 1818: Eastern State, in Philadelphia, and Western State, in Allegheny, which would later be annexed by Pittsburgh and known as the North Side.

The design of these prisons was to follow the new “Pennsylvania System,” the brainchild of the Prison Society.  Rather than simply boarding prisoners like animals in a stable, the Pennsylvania System sought to reform inmates through labor and religious counseling while housing them in solitary confinement.  Inmates were to reflect on their misdeeds, exhibiting their penitence, leading to the term “penitentiary.”  Through this indoctrination by work and religion, it was hoped to convert criminals into law-abiding, functional Americans.

Following passage of legislation in 1818, noted American architect William Strickland was selected to design the Western State Penitentiary.  Construction began immediately at what is now the site of the National Aviary on Pittsburgh’s North Side.  Work lasted until July 1, 1826 when the first inmates arrived, eleven men and one woman.  (Eastern State would not open until 1829).

Little is known about inmate life during this period.  Inmate labor most often consisted of sewing for female inmates and the construction of shoes by male inmates, all of which was done in solitary confinement.  Silence and minimal human contact was also strictly enforced.

Western State contained 190 solitary confinement cells, measuring eight by twelve feet each.  The exterior resembled a Norman castle, with walls three feet thick, and a layout resembling a wagon wheel (for which Eastern State has since become famous).  Despite its cost at $178,206 and strict adherence to the new Pennsylvania System of penology, the cells were deemed too small and dark for inmate labor in solitary confinement, and orders were given to demolish the cells and construct larger ones on the same site.

Following the decision to rebuild the cells, William Haviland, who had designed the Eastern State Penitentiary, was selected to redesign Western State.  Instead of seven radiating wings, as at Eastern State, Western State would eventually have (after further expansions) three main wings connected to a main building, containing in all 230 cells. 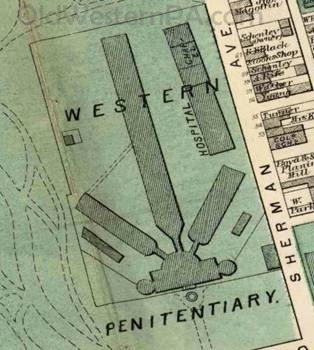 The slow growth of the prison population in the years prior to the Civil War allowed Western Penitentiary to continue the practice of solitary confinement without any concerns about overcrowding.  In the ensuing years, however, steady increases in the population prompted further development. The prison expanded to contain 324 cells and had added a new hospital building by 1865, along with a new building for housing the female inmates (with 24 cells) in 1870.  The new cells were enlarged to seven feet-ten inches by fifteen feet, with gas lights, a four-inch slit-window, and steam heating.

Major changes in operations and inmate life occurred in 1869 with the appointment of Edward “Sandy” Wright as warden.  Wright eliminated the system of constant solitary confinement, allowing inmates to congregate for work, meals, worship, for greater production efficiency and mental health.  Additionally, he implemented early release for good behavior, a forerunner of today’s parole system.

Even with this series of expansions, the inmate population continued to outpace structural growth.  Coupled with the growing neighborhood around it in the 1870’s and their distaste for convicted neighbors, Western State Penitentiary began looking for a new home.

In 1876, fifty years after the opening of Western State Penitentiary, Warden Wright pushed for a new prison for new times. The rapid industrialization of  was matched by rapid inmate population growth.  A new home was found in the abandoned Western House of Refuge, which had served as a home for juvenile delinquents, located along the Ohio River.

The operators of the Western House of Refuge had abandoned the site, believing it suffered from poor sanitary conditions, and instead creating the Morganza Reform School in Washington County.

After purchasing the site in 1878, the process of transferring inmates to the building began, even while architect E.M. Butz commenced renovations and expansions.  Inmate laborers worked through 1892, erecting the new south wing, renovating the administration building and constructing a new attached home for Warden Wright.  When completed, it was the most modern prison in the world, boasting 1,280 cells in two wings, each five tiers high in the new style congregate system.  It was the first prison in the world to have gang locks, electric lights, running water, heat and exhaust ventilation, and a toilet in each cell.

In addition to updated physical features, Western State Penitentiary would make social advances in welcoming Dorothea Dix, the famed activist whose efforts created the first generation of mental asylums in the United States. Working with Dix, Western State Penitentiary would be a pioneer in addressing mentally ill inmates, who would be among the first patients at Dixmont State Hospital, established just 10 miles downriver.

The new location also allowed for the growth of inmate labor.  Industrialization brought mechanized labor behind the walls.  Inmate industries expanded to include making shoes, brooms, chains, cigars, weaving mats, and leasing labor to outside industries.

Inmate labor became so successful that its profits spared taxpayers the majority of incarceration costs.  However, following the passage of repressive legislation in 1898, inmate labor was severely curbed and relegated to supporting prison operations and producing goods for the state, such as the production of automobile license plates.

Throughout the twentieth century, Western State Penitentiary would continue to be the western cornerstone of Pennsylvania’s prisons. Just as Pennsylvania’s penal facilities grew and shifted, their governance moved from a sub-bureau of the Department of Welfare to the Bureau of Corrections under the Department of Justice, and finally as an independent Department of Corrections. Western State Penitentiary adapted as well, changing its name to SCI-Pittsburgh in 1955, adding two new cell blocks in the 1980’s, and  Riverside CCC. 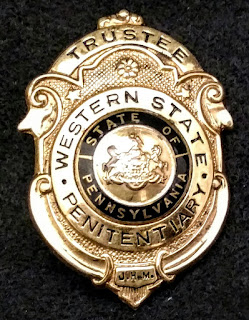